Pregnancy toxemia is a comm 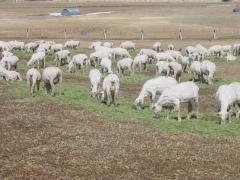 only occurring, metabolic disease of pregnant ewes near term.  The disease usually occurs in older ewes carrying multiple lambs and in extremely thin or overly fat ewes.  Irregular feeding caused by inclement weather or stress produced by dogs or predators can precipitate an outbreak of pregnancy toxemia.  The basic cause of pregnancy toxemia is a diet deficient in energy during late pregnancy when fetal growth is occurring very rapidly.

Ewes with early pregnancy toxemia are dull and lag behind the flock.  They may grind their teeth and have labored breathing along with frequent urination.  They have a general unsteadiness, may appear detached from their surroundings, and some animals tend to walk in circles or push against solid objects.  In the later stages, the animals are unable to stand.  Depressed activity complicates the ewe’s condition by further reducing grazing activity and feed intake.  Animals that become recumbent usually die within several days.

Treatment is implemented to increase the blood sugar supply to the body.  Treatment of ewes in the advanced stage of the disease is usually discouraging.  If a flock outbreak appears to be occurring, concentrate feeding in the ration should be increased or initiated.

Pregnancy toxemia can be prevented by understanding the disease and utilizing proper nutrition and management.  Producers should strive to prevent ewes from becoming overly fat in early pregnancy and to provide sufficient energy during the last four to six weeks of gestation.