The last four to six weeks of gestation is a critical nutritional period, because at least two-thirds of fetal growth occurs during this period.  Nutrient restrictions at this time will result in lighter weight lambs at birth, unequal birth weights of twin and triplet lambs,  reduced mothering instinct, lowered milk production, increased early lamb loss and possibly pregnancy toxemia.  Because of the increased fetal growth during this period of the ewe’s biological cycle, ewes carrying a single lamb require 50% more energy (ewes carrying multiple lambs require 75% more energy) than in early gestation ration.  Ewes on traditional forage diets generally will not be able to consume enough forage to meet their daily energy needs.  In these cases, producers may choose to supplement the ewes base diet with grain (1/2 to 1 pound for ewe flocks with lower expected lamb crops – 130 to 150 percent; 1 to 2 pounds for ewe flocks with higher expected lamb crops-180 to 225 percent) during the last 4 weeks of gestation.  If high numbers of triplets are expected grain supplementation may need to begin as early as 6 weeks before lambing.  All dietary changes should be made gradually. 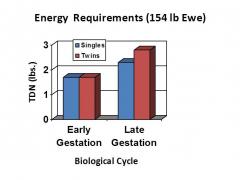 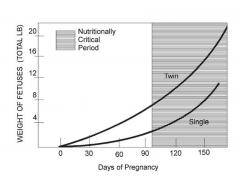 Proper feeding during pregnancy is critical if subsequent milk production is going to be maximized .  At lambing, ewes should have a slight build-up of fat reserves (body condition score of 3.0 to 3.5) to be used during early lactation.  Excessive body conditions (4.0 plus) are not desirable.