Fall lambing is a technique that can be utilized to capture additional productivity from many of today’s sheep breeds.  Fall lambing has many positive attributes, including but not limited to, increased utilization of facilities and other resources, accelerated returns on animal investments, provide year-round supply of lamb, and provide options to lambing outside winter and spring months. The two negatives of fall lambing are lower conception rates and fewer lambs born per ewe lambing.

Most sheep will stop cycling when days start getting longer (Jan/Feb) and return to cyclicity when days start getting shorter (Aug/Sept).  However, some breeds with naturally long breeding seasons (6-8 months), such as Dorset, Polypay, Rambouillet, Targhee, Katahdin, and Finnsheep, start cycling sooner and adapt to fall lambing with more success than short length breeding seasons (4 months) breeds.  Selecting replacements from dams that have proven records of fall lambing will greatly increase the genetic base within a flock to lamb in the fall. 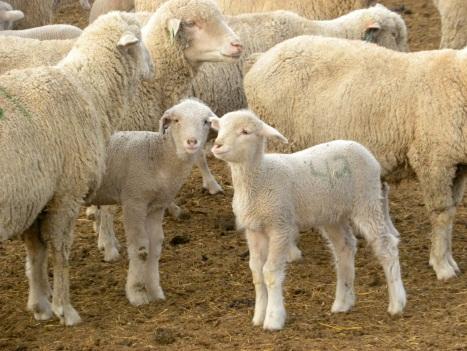 To develop a fall lambing flock from any breed, adequate nutrition and veterinary care must be provided.  Nutrition is extremely critical in that first year when one is accelerating the flock.  While many methods of inducing estrous are available (CIDR and light priming), novel exposure of sexually active rams has proven to be cost effective and successful.  This phenomenon termed the “ram effect” induces estrus acticity, however, the ewes rarely true estrus (ram receptivity) until the next cycle (14-21 days).  Additionally, the ram effect is a natural response that can be selected for, whereas, exogenous hormone therapy does not specifically select for fall lambing genetics.  For initial creation of a fall lambing flock, expose intact rams to ewes from April 4 to May 25.  Ewes must not have had any exposure to rams for at least six weeks.  Most likely, only a small portion of ewes (less than 10%) will lamb from Sept. 1 through Sept. 17.  The majority of the ewes will likely lamb during their second cycle, with the remaining ewes lambing in their third cycle.  Initial pregnancy rate success varies widely, but with continued genetic selection, pregnancy rates can reach 90% within 10 years of initiating fall lambing management.  Ewes that lamb in the first 17 days would be those that were still cycling naturally.  For the best success to ram exposure, ewes should be isolated from rams by at least one quarter mile for a minimum of six weeks prior to exposure.  Light priming rams to make sure they have high libidio and semen quality is another step to improve spring conception rates.

Accelerated lambing is a similar but different concept to increase lamb production and provide lamb crops at non-traditional times of the year.

The North Dakota State University Hettinger Research Extension Center has developed a 500 head fall lambing Rambouillet flock.  The research center lambs in three distinct lambing seasons: fall, winter, and spring.  All replacements come from the fall lambing flock.  Ewe lambs are exposed to lamb in January at 16 months of age because very few ewe lambs born in the fall will breed to lamb in the fall as ewe lambs.  After their first lambing, they are exposed shortly after weaning to lamb the following fall. For more information on this flock, please contact: